Living organisms reproduce sexualy or asexualy. Therefore, we say that there are two types of reproduction.

2.  Watch this video to learn about the MALE REPRODUCTIVE SYSTEM.

3. Act: Summarize the functions of each of the organs which are part of the male reproductive system. Take a look at THESE SLIDES !

Penis: This is the male organ used in sexual intercourse. It has three parts: the root, which attaches to the wall of the abdomen; the body, or shaft; and the glans, which is the cone-shaped part at the end of the penis. The glans, also called the head of the penis, is covered with a loose layer of skin called foreskin. The opening of the urethra is at the tip of the penis. The glans of the penis also contains a number of sensitive nerve endings. The penis delivers semen to the female during intercourse and has the urethra, which is used to transport semen and urine.

Testicles: these are oval organs that lie in the scrotum Men have two testes. The testes are responsible for making testosterone and for generating sperm.

Scrotum: This is the sac of skin that hangs behind and below the penis. It contains the testicles (also called testes), as well as many nerves and blood vessels. The scrotum acts as a climate control system for the testes. For normal sperm development, the testes must be at a temperature slightly cooler than body temperature.

Urethra: the tube that carries urine from the bladder to outside of the body. It has the additional function of ejaculating semen when the man reaches orgasm.

Bulbourethral glands: pea-sized structures located on the sides of the urethra just below the prostate gland. These glands produce a slippery fluid that serves to lubricate the urethra and to neutralize any acidity that may be present due to residual drops of urine in the urethra.

Epididymis: a long tube that rests on the backside of each testicle. It transports and stores sperm cells that are produced in the testes. It also is the job of the epididymis to bring the sperm to maturity, since the sperm that emerge from the testes are immature and incapable of fertilization.

Seminal vesicles: pouches that attach to the vas deferens near the base of the bladder. The seminal vesicles produce a sugar-rich fluid (fructose) that provides sperm with a source of energy to help them move. The fluid of the seminal vesicles makes up most of the volume of a man’s ejaculatory fluid, or ejaculate.

4. State the components and the function of semen.

Semen is a greyish white bodily fluid that is secreted by the gonads of male animals. It carries sperm or the spermatozoa and fructose and other enzymes that help the sperm to survive to facilitate successful fertilization.

5. Make a large labelled drawing of a sperm cell and state how the structure is adapted to its function. (Do not add a picture). 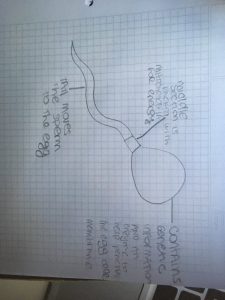 The NEURONS are special cells which coordinate the messages travelling through the nervous system.

Act: State how the structure of a neuron is related to the function.

Sensory neurons: get information about what’s going on inside and outside of the body and bring that information into the CNS so it can be processed.

Motor neurons: get information from other neurons and convey commands to your muscles, organs and glands.

Relay neurons:  carry messages from one part of the CNS to another.

YOU SHOULD MAKE THE DRAWING